Welcome to the 2023 Swedish championship in Västervik, the gem of the Swedish east coast. Anders Olsen, Folkboat sailor and former resident of Västervik gives some information on the championship and about the town.

The championship is hosted by the two Västervik yacht clubs WSSW and WSS. The regatta harbour will be at island Slottholmen in central Västervik, on the jetty below Hotel Slottsholmen. Hotell Slottholmen is a newly built hotel, owned by Björn Ulveus of Abba, and will also be the location of the regatta dinner.

Launching will be possible at the WSSW harbour at Notholmen. There are cranes for both boats and masts. At the site, it will be possible to put tents and campers and use the facilities of the yacht club. The distance between the two harbours is less than a kilometre walking or biking along the shore.

The main race area is lake Lusärnafjärden 1,5 nM from Slottsholmen. Open water is 5 nM further out and therefore not within the plan.

Staying in Västervik
To stay in tent or camper in the WSSW harbour Notholmen is a good alternative. No cost during the championship and other days the yacht club’s standard fees will apply.

There are a couple of hotel and hostels in town, but book early since Västervik is a popular summer town. Some alternatives:

map with hotels and restaurants

The archipelago
Anders really recommends paying a visit to the beautiful archipelago outside Västervik. Take a couple of days off to go see this.

Other
Travelling sailors may stop at Vikingarnas SS premises in Stockholm on their way to the Gold Cup or in between the Gold Cup and the Swedish Championship after contact with Hans Torlén. 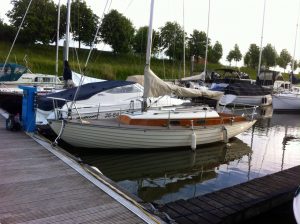 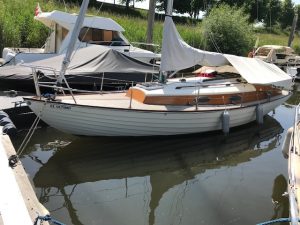 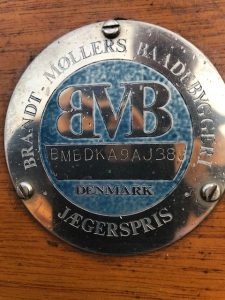 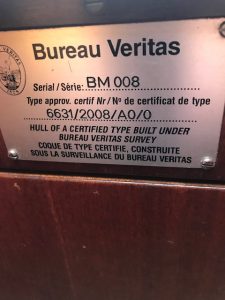 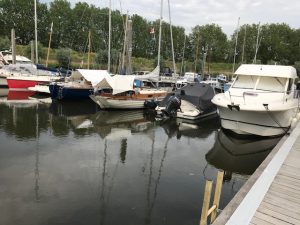 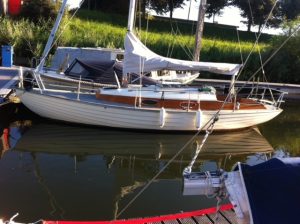 On April 23rd 2022, one of the most iconic small yacht designs of the 21st century celebrates its 80th birthday. We want to share this much loved design through its inception to present day. Here we provide the key milestones and development of a class sailed by thousands over the years and by many generations of sailor.

The story begins with a Nordic design competition being announced in 1939. The invitation stated that the boat would be easy and cheap to build and suitable for factory production. In addition, it had to be seaworthy and provide sleeping space for 3-4 people. The building materials Nordic wood and iron keel, had to be used to make production cheaper.

The response from the designers was overwhelming and no less than 59 competition entries were submitted. They came from all the Nordic countries. A first reduction of entries was done in each country, after which the countries’ representatives came together for a final assessment. Below we show the timelines during and since the competition.

Nov. 1939: The Royal Gothenburg Sailing Club desires the creation of a new one design class that offers more room and beam than a Dragon, and cruising accommodations of sorts to small family.

May 1941: The Scandinavian Sailing Association fields 58 design suggestions that were returned but none satisfies the fancy of the jurors. But the top four entries and two others showing interesting details were awarded prize money on a sliding scale from 900 to 300 Danish crowns. After some deliberation, the association contracts Tord Sunden, a Swedish yacht designer, to collate the top four entries into one, following the committee’s strict guidelines.

Summer 1941: The final plans are published by the SSA

April, 23 1942: The Launch of the first prototype as soon as the Nordic winter recedes and the Gothenburg harbour is free of ice. To jumpstart the class, Sahlen orders 60 boats being built in Swedish yards.

Although many traditionalists turned up their noses at the new and somewhat unusual design sporting a traditional lapstrake hull, a simple Bermuda rig and a raked transom, enthusiasm about the boat’s seaworthiness and well-mannered behaviour in strong winds and high seas began to spread through the sailing community. However, the war hindered the rapid proliferation in the early years. Sales began in all earnest in the late forties. The boat was very much seen as a cruising boat as much a racing boat, and this is very much the case in current times, with extremely active cruising sailors. The Folkboat started an era of small cruising boats.

1957: A key milestone was the first boat launch in Germany. Germany is now the largest Folkboat sailing nation with 13 fleets and over 455 active boats sailing within these fleets. This being said it took until 1967 for the German sailors to start an Association, and this was the real beginning of their ability to host major Folkboat regattas, of which this current year the Gold Cup is hosted in Kiel.

1958: The UK entered the Folkboat arena. This said the UK had requested changes to the original Nordic design. These changes were innkeeping with trend of the time, and the British Folkboat derivative was born, in many shapes and forms. It was much later in 1983 did the GRP Nordic version really take off as a distributor had been appointed which allowed freer flow of the true Nordic boat into the country.

1960-1970: Due to its versatility as a capable racer and weekend cruiser, the Folkboat prospered in Sweden, Denmark, Finland, Germany, UK, Ireland, in the Baltic countries, in Australia and on San Francisco Bay. Conspicuously absent in this list is Norway, which fell in love with the Knarr, a pretty carvel-planked long keeled that came about in 1943 and shunned the supposedly more plebian Folkboat. But unlike the Knarr, the Nordic Folkboat inspired countless designs for small and seaworthy cruisers, which were sailed across oceans and around the world. These derivatives, mostly built in fiberglass popped up in multiple countries. This being said, we all agree any copying is really flattery, and the Folkboat continued to grow albeit at a slower rate than anticipated.

1976: Erik Andreasen in Denmark follows suit and manages to get fiberglass boats approved by the SSA, who still governs the class. What sounds like an anachronism building a clinker boat in fiberglass, may have well saved the Folkboat’s life by helping to reverse the trend of dwindling participation in events. An important reason for new-found prosperity was that GRP did not sail faster than wood. It just required less elbow-grease for maintenance. And that popular trend continued until today. Erik was instrumental in getting the volume of boats into Europe. The long lasting appeal to the racing community is that due to the robust GRP construction applied in the early manufacturing of the boat, a 1976 boat is as competitive as a 2022 boat. This demonstrated by the age of the last Gold Cup winner being a 1979 boat.

1976 – 2000: These years saw new fleets emerge and establish themselves, particular countries of note would be Finland, Estonia and The Netherlands. The former hosted the Gold Cup in 2015 which was a massive success. With emerging Folkboat Nations always supported, we will see the 2023 Gold Cup hosted by Estonia for the first time, but at the fantastic 1980 Olympic venue in Tallin. We expect events to be hosted in The Netherlands soon. This year also will see the other major recognised International event ‘The Sessan Cup’ hosted in the UK. This demonstration of commitment to support emerging Folkboat sailing countries is second to none. From 1976 – 2000, really saw class development and expansion to provide longevity to the class.

July 2000: Another anachronism is set to occur: the approval of aluminium as building material for class legal spars. Soren Backman, a test engineer with Saab Aerospace, spent years behind powerful computer workstations, designing an aluminium mast that emulates the bending characteristics of the average wooden Folkboat mast. Tests showed that he did such a good job that there is literally no difference in the performance of wood and aluminium, repeating the GRP vs. wood experiment a quarter of a century ago. If the proposal is sanctioned by the Scandinavian Sailing Association, Folkboat sailors will be the first ones to buy wooden masts effectively made from aluminium.

2000 – 2022: The past 20 years has seen further boats built, fleets in Estonia, Finland and The Netherlands established. We have had new aluminium mast manufacturers enter, with a true tapered variation.

The 75th Anniversary of the GC was hosted in Kerteminde, the sailing club with the greatest numbers of wins of any club whose sailors have participated in the event with 9 Cup wins. The 75th attracted 80 entrants, with 6 countries represented (Sweden, Germany, UK, Finland, Denmark and Estonia).

The large country fleets of Germany, Sweden and Denmark still have between 30-50 boats competing at their National Championships and it is still very much an event on everyone’s calendar to participate and win.

The boat has not changed its athletics or beauty. In the past twenty hears we have seen many sailors come in to the boat, from Olympic Gold Medallists to family day cruisers. The wide appeal still is in existence. Due to the amount of boats build and still in circulation, we believe to top 5,000 it makes a very buoyant second hand market, with boats to suit all budgets. Most countries associations host active brokerage and new boats are still being produced by Haubold Yachting in Germany.

In summary the Folkboat has influenced generations and been passed down to many sailors, the qualities in 1942 are still the qualities today, whether you cruise the boat or race the boat, you cannot help but fall in love with this timeless classic. When speaking to professionals, ex Olympic sailors or club racers all say one thing, the challenge to sail a Folkboat fast is a thrill, as it is sailing at its purest with the simple two sail configuration, it takes you back to the basics of yacht racing. One thing I always believe is true the boat has always been the focus and as the title really translates, it is the ‘peoples boats’ – ‘Folkboat’. 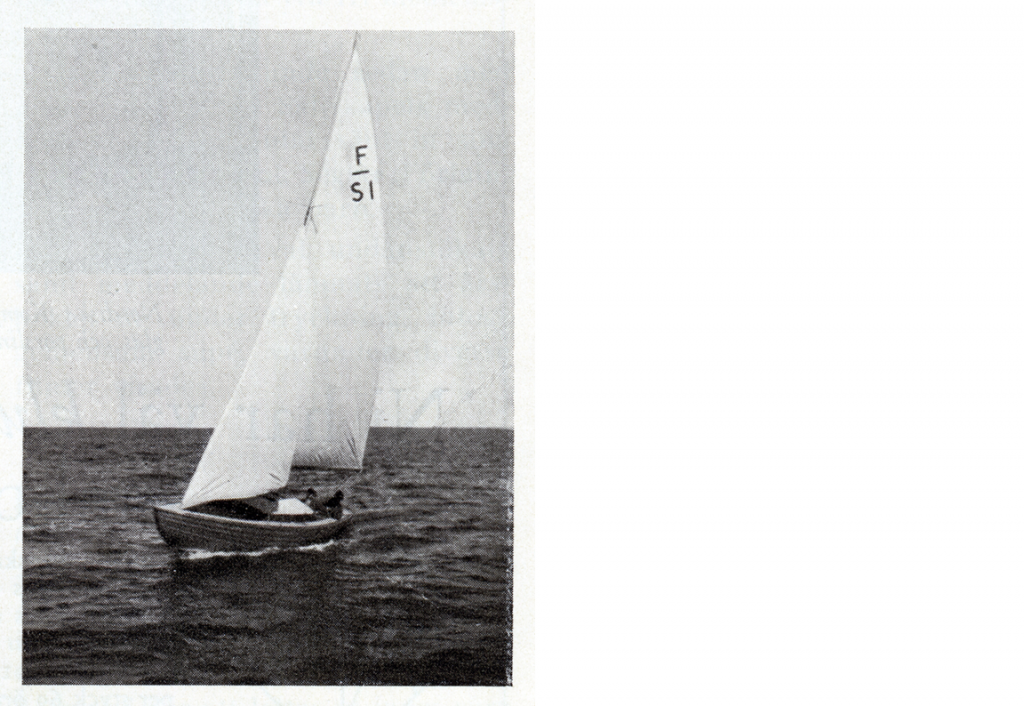 ” The old merchant and shipping city of Ystad has in modern times become one of Sweden’s most popular tourist destinations with chalk-white beaches for swimming and an old town with well-preserved buildings. Yearly, cultural events, such as the Ystad Sweden Jazz Festival, are held with visitors from around the world. The city is also home for two handball teams in the men’s national top tier.

Ystads Segelsällskap was founded in 1932 and therefore celebrates its 90th anniversary in 2022. Meanwhile, the Nordic Folkboat turns 80 years. Both these anniversaries will be celebrated during YSS Jubileumsregatta 6–14 August. The regatta will start with ILCA Master sailing their Swedish Championship 6–7 August, followed by the Nordic Folkboat and H-boat Swedish Championships 11–14 August.

Besides fleet racing on one of the best sailing arenas in the country just outside Ystad harbour, there will be food and social activities on land.

Ystad Segelsällskap invites all Folkboat sailors to the regatta and hope that many of our international Folkboat friends will attend. Notice of Race will be published later.